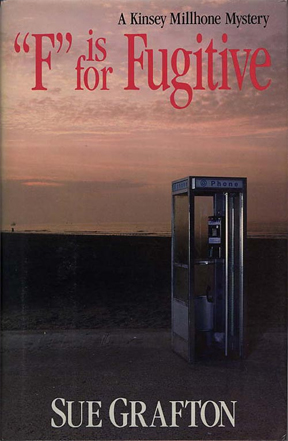 F is for Fugitive by Sue Grafton is the sixth book of her Alphabet Series centered on Kinsey Millhone a tenacious detective based in California during the 1980s.

In this installment of the series, Kinsey travels from her home of Santa Teresa to Floral Beach so anticipate a change of scenery and a collection of new characters, which is a welcomed change.

As the story goes, the murder of seventeen-year-old Jean Timberlake shocks the small community of Floral Beach, a tiny beachside town. Bailey Fowler who confessed to the crime escapes shortly after being imprisoned, and over a decade later is recaptured and sent to prison again. This time Fowler’s father hires Kinsey to prove his son’s innocence. In her search for the truth, Kinsey finds that everyone in town is hiding a secret and all seem to have a motive for killing young Jean.

Grafton takes us on a wild ride by skillfully outlining the motives of the various residents of Floral Beach for killing Timberlake and keeps us guessing who the actual murderer is until the end.

A solid read and entertaining to the very end.

FUN FACT: In an episode of The Sopranos, Edie Falco’s character, Carmela Soprano, is seen reading Grafton’s G is for Gumshoe.

This site uses Akismet to reduce spam. Learn how your comment data is processed.